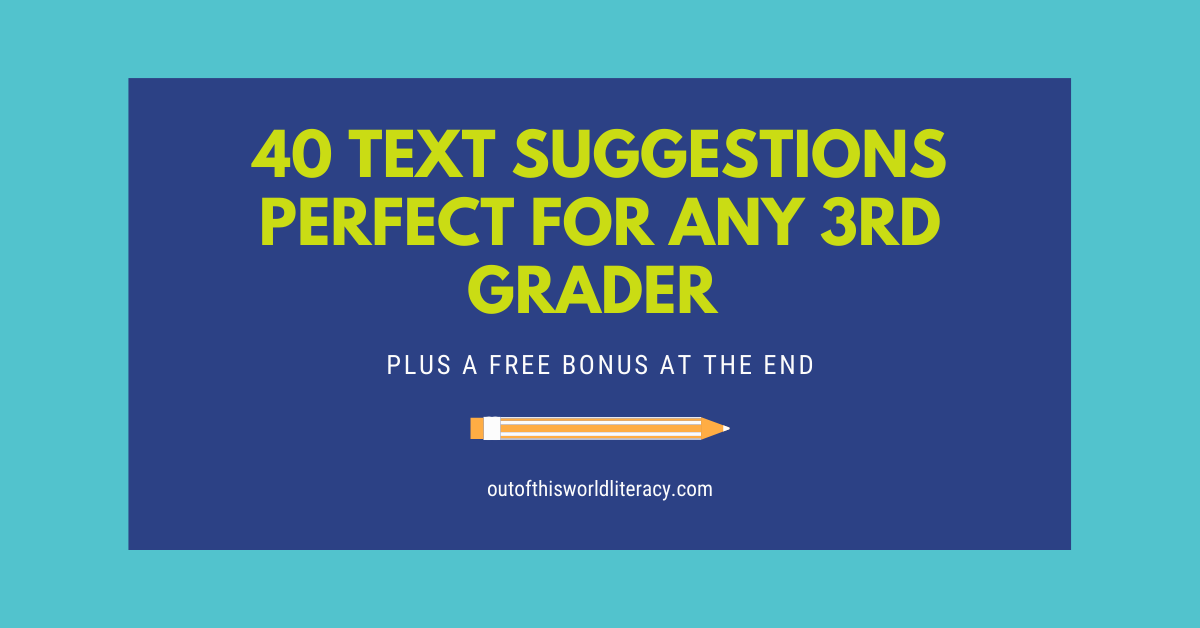 *all links are affiliate

I get asked all the time what texts are perfect for each reading level. Here you will find a LARGE list of text suggestions for grades 3rd and 4th.

Chicken Sunday is a story filled with family values where a young Jewish Russian girl and her two African-American neighborhood friends devise a plan to raise money to buy the boys' grandmother a new Easter bonnet. It bridges racial and religious differences in a beautiful tale about building relationships.

Alexandar, Who Used to Be Rich Last Sunday by Judith Viorst

In the story, Alexander, Who Used to Be Rich Last Sunday, Alexander receives a dollar from his grandparents that he plans to save, but he spends it all, a little at a time. This story is a great way to introduce and practice financial literacy skills.

Themes: Responsibilities, value of money, and control of impulses

Cloudy with a Chance of Meatballs by Judi Barrett

The tiny town of Chewandswallow was very much like any other tiny town—except for its weather which came three times a day, at breakfast, lunch, and dinner. Life was delicious for the townspeople before the weather took a turn for the worst.

Judy Moody doesn't have high hopes for third grade. But she does have an abundance of individuality and attitude.

The Beast in Ms. Rooney’s Room by Patricia Reilly Giff

Richard “Beast” Best is a struggling reader who is worried about being teased. He might have to repeat the same teacher and take a special reading class with “babies” like Emily Arrow and Matthew Jackson. Richard also can keep out of trouble. Luckily, he is placed in Mrs. Paris reading class who shows Richard that reading can be fun!

This adorable book about tiny animals is the cutest thing you’ve read all year. There are all sorts of itty bitty animals out there: dogs, pigs, frogs, lizards, and more! Each one is small enough to fit into the palm of your hand and cute enough to melt your heart.

The Picture History of Great Inventors by Gillian Clements

Follow the lives and work of over 50 major innovators as you set off on a journey from the earliest inventions in recorded history to the most recent developments in science and technology.

A perfect book to pair with Alexander, Who Used to be Rich Last Sunday, Saving Money focuses on the exploration of the history of coins, money, and finance. Dana Meachen Rau gives sound advice for safe and responsible handling of money.

France E. Ruffin provides readers with many engaging text features such as maps and charts to increase understanding of Ellis Island.

No matter what Amber does, it isn’t enough. She straightens up her room, sort of. She does her homework, well, most of it. And she agrees to meet Max, her mother’s new boyfriend, but she doesn’t agree to like him. Amber continues to fall short, and now she is in deep trouble. All she wants is a little extra credit. She really tries … But how will she succeed?

Can you ever have too much of your favorite food? John Midas is about to find out! This unique twist on the legend of King Midas, John acquires a magical gift that turns his lips touch into chocolate!

My Father’s Dragon tells the story of when a young Elmer traveled to Wild Island to save a dragon hatchling. Elmer uses his creativity and quick thinking to complete his rescue mission.

My Name is Maria Isabel by Alma Flor Ada

“For María Isabel Salazar López, the hardest thing about being the new girl in school is that the teacher doesn't call her by her real name. “We already have two Marías in this class,” says her teacher. “Why don't we call you Mary instead?” But María Isabel has been named for her Papá's mother and for Chabela, her beloved Puerto Rican grandmother. Can she find a way to make her teacher see that if she loses her name, she's lost the most important part of herself?”-Amazon

The Talent Show from the Black Lagoon by Mike Thaler

Mrs. Green says everyone must perform in the talent show for exactly one minute in front of the whole school and their parents! Even though a talent show from the Black Lagoon would give any kid stage fright, with a little luck this performance might turn out to be fun!

A true story about a great man and his speech.

George vs George: The American Revolution as Seen from Both Sides by Rosalyn Schanzer

There are two sides to every story. Follow along to learn about George Washington, the man who freed American colonies from the British, and George III, the British king who lost them.

Basketball’s Great Players offers tons of facts about the best players in the game, what they are known for, and how they got their start.

Dancing with Manatees by Faith McNulty

Examines the physical characteristics, behavior, and evolution of this gentle creature.

The perfect book to add to your planet unit! An introduction to Mercury, describing its place in the solar system, its physical characteristics, its movement in space, and other facts about this planet.

Lucas Cott, the loudest boy in the third grade, struggles to change his ways when he decides to become the perfect student

Dirty Beasts is a collection of poems about mischievous and mysterious animals. Roald Dahl wrote themes of animals and ‘beasts' – ranging from a giant toad and snail to a monster living in a boy's tummy.

Henry and Ribsy by Beverly Cleary

Henry has a strong bond with his dog Ribsy, even if he is a trouble-maker. So when Henry asks his dad if he can go along on the big fishing trip, Mr. Huggins agrees, but on one condition: Henry must keep Ribsy out of trouble. Can Henry keep his promise?

Although Ramona likes being counted on, she is starting to realize that getting older means more responsibilities. Mrs. Quimby is heading back to work so Mr. Quimby can return to school leaving Ramona with Mrs. Kemp. Ramona has to be brave enough to ride the school bus by herself. Oh, and  Danny the Yard Ape won’t stop teasing her!

Themes: Try your best, face your fears, be yourself

Taking place during the Great Depression, Turtle is sent off to Key West, Florida to live with relatives she’s never met. Will the Florida sunshine bring Turtle out of her shell that she has spent her whole life building?

Armies of Ants by Walter Retan

Describes the physical characteristics, behavior, and habits of ants and discusses their ecological importance

From bulldogs to sloths, lemurs to hippos, there are ugly cute animals all across the animal kingdom.  Ugle Cute Animals features large full-color photos with fun facts about each creature. Readers will get a kick out of silly creatures and the trendy phrase “ugly cute.”

In Explore My World Penguins, readers will learn about the delightful world of penguins: the extreme lengths they go to to care for their young and the relationship between baby penguins and their parents.

Everything Birds of Prey by Blake Hoena

From eagles to falcons and talons to beaks, Everything Birds of Prey introduces readers to the world's most ferocious fliers.

Animal Senses reveals the extraordinary ways animals sense their environment. Easy-to-do experiments and activities show kids how to compare animal senses to their own.

The death of Mattie's father throws her entire family into hard times. As Mother's Day approaches, Mattie becomes determined to buy her mother a gold pin.

Fly Away Home by Eve Bunting

A homeless boy who lives in an airport with his father, moving from terminal to terminal trying not to be noticed, is given hope when a trapped bird finally finds its freedom.

Adventures of three boys–Joe, Sam, and Fred–who travel through time and space with the aid of a mysterious object known as “The Book”.

“Someone has left Otis, an adorable tabby, all alone at the local community center. When Michael and Mia hear about the abandoned kitty, they volunteer to help. Otis is wary of strangers and scared of loud noises. His sad yowls keep the family up all night! Michael knows not just any owner will love this tentative tabby. Can he find Otis a forever home?”-Amazon

The Magic School Bus Inside the Human Body by Joanna Cole

Frizzle and her class are on the Magic School Bus headed for a museum. They have been studying how the body turns food into energy, and now they are going to see an exhibit on the human body. Things seem fine until they stop for lunch. A strange mishap causes the bus to shrink and then be swallowed!

One Day in the Desert by Jean Craighead George

Follow along as a wounded mountain lion moves from his mountain habitat to a Papago Indian hut in Arizona’s Sonoran desert during a record-breaking July day.

Laura Ingalls Wilder: Growing up in the Little House by Patricia Reilly Giff

Learn all about Laura Ingalls Wilder’s life, the creator behind the Little House books!

This book tells you what it was like during the exciting era when Martin Luther King led the fight against segregation.

The Daring Escape of Ellen Craft by Cathy Moore

“On December 21, 1848, Ellen Craft and her husband, William, slipped out into the cold, dark night and took their first steps towards freedom. They were runaway slaves. Posing as a white man traveling with a slave, Ellen courageously boarded a train bound for Philadelphia. Could they actually make it a thousand miles without being discovered? As each tension-filled day passed and freedom got closer, Ellen and William risked everything – even death – to be free.”–Amazon

My name is Jen and I am a curriculum writer, teacher trainer, blogger, homeschool mama of 4 & so much more! My goal is to provide teaching tips, resources & trainings for teachers & homeschoolers so that we can help all our kids reach their highest potential! Read more...

This error message is only visible to WordPress admins

Please go to the Instagram Feed settings page to create a feed.

Please log in again. The login page will open in a new tab. After logging in you can close it and return to this page.